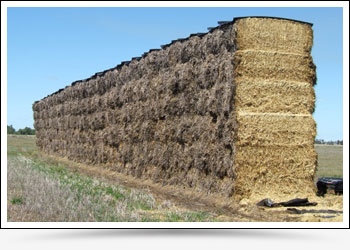 Don’t just take our word for it, this is what our customers are saying...

I have been very happy with the Hay Caps and the screw type anchors. They have withstood all weather and wind without fail and they have been used every day since I got them.
Camperdown, VIC. July 2012

We first put some Hay Caps on 113 tonne of field pea hay in October 2009.  We sold a lot of it in Sep 2011.  In this time the rainfall on the stack would have been 1200mm.  The buyer, and ourselves and our truck driver couldn't believe how well the hay had been preserved over that period. A little mouse and rabbit damage, but very little weather damage.  We won't even bother thinking about an extra shed now.  We have capped 300 tonne in 2010 and 300 tonne in 2011 also.  I also really like how safe they are to use.  My husband drives around in the paddock after the baler, putting a cap on every sixth bale and our contractor who stacks them does the rest. Thank you for a good product.
Kerang, VIC. Feb 2012

Hay Caps have saved the expense of building a shed, and it doesn’t matter how high you make the stack you just cover the top bale with a Hay Cap and its finished.
Bourke, NSW. Nov 2011

Should have covered all my hay with Hay Caps. Ending up losing the top two bales of hay that wasn’t covered. Hay Caps would have paid for themselves.
Swan Hill, VIC. Sept 2011

Just thought I would drop you an email to let you know how impressed we are with the Hay Caps. As you are no doubt aware of how tough the last few hay seasons have been, both making and trying to sell hay we have only just started to move hay from 18 months ago. Because of the uncertainty of having a market (therefore not investing in covering it) most of it was just stacked 6 high with no cover and we have lost up to 50% of those stacks of oaten hay. However we did purchase 50 of your covers and put over a 300 bale stack and only last night took out the first semi load to find minor damage on the first two six’s then no damage at all from there on in. After 18 months and countless inches of rain it is near as good as having been in a shed. Greatest idea ever for ease of covering hay, thanks again!
Stawell, VIC. June 2011

Just letting you know we finally had the chance to use the Hay Caps the other day and are extremely pleased with the ease and the safety of putting on the Hay Cap to the bale.

I now have major back problems & my brother-in-law has the usual aging farmer problems and we were finding that tarping stacks were becoming more difficult and dangerous but your product is a breeze to use and has eliminated the danger risk of covering hay. We have already fielded a couple of queries by our neighbours and passers-by and have passed on your information to them. Once again thank you for your great service and if needed in the future, we will have no hesitation in buying more Hay Caps.
Cowra, NSW.  Jan 2011

The fall was fairly wet with lots of high winds 30-50 mph.  The Hay Caps withstood the winds no problem and recently had a 6" snow storm which did not affect them.  I believe the caps are great product and worked out well when we were baling second crop.
Pennsylvania, USA

The few I have in use are performing well through snow, sleet, wind and rain. I plan to recommend them to my fellow growers in our future meetings. I think they are way better than tarps in that they are far more durable, far easier to handle, and more adaptable to odd shaped stacks. I look forward to using them year after year. I also use them as immediate temporary cover of daily harvest until such time as shed storage is available.
Oregon, USA. Dec 2010

I can cover my hay quickly if rain event is coming.
St Arnaud, VIC. Aug 2010

Hay Caps are extremely convenient, one person can apply quickly and they enable us to stack our hay in the corner of each paddock immediately after it is baled
St Arnaud, VIC. July 2010

Hay Caps add value to my business because at harvest time I can protect hay quickly and efficiently when rain is imminent. And there is minimal wastage during storage.
Ballarat, VIC Aug 2010

We achieved 100% sales of all our hay covered with Hay Caps. Hay Caps save the need for additional shedding - a large capital outlay. They can be used at other locations throughout our farm which saves us cartage cost and time.
Shepparton, VIC

We have not had to touch any Hay Caps since they were put on, unlike when using tarps. Over the life of Hay Caps they will be a lot cheaper than tarps, a lot less mess i.e. no torn, worn out tarps to dispose of, less wastage in the stacks. The rain seems to shed off the ends well.
Temora, NSW

Being a contractor we have paddocks of hay on share farms and every year hay is stored at different locations. To help save on transport costs we store hay under Hay Caps on job sites.
East Gippsland, VIC

Hay Caps are less expensive than losing the top bale of the stack.
St Arnaud, VIC

We sold last lot of hay stored under Hay Caps in July with no weather damage.
Kerang, VIC