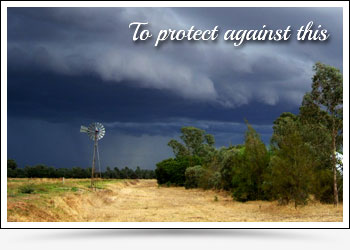 Or here it is another way:

Hay needs to be covered.

The rain in the Eastern States of Australia March 2012 was unprecedented. It was proven yet again that hay needs to be stored properly until the market needs it. Cereal hay made in 2010 that couldn’t be sold in 2011 was then in high demand in 2012. Rainfall in that 18 month period was upward of 36” including flooding rains of 10” in 1 week.

Buyers and transporters don’t like mouldy or rotten hay, and there are examples of uncovered stacks losing 50% of the bales due to this in that time frame. Proving yet again that hay not stored correctly costs money due to high losses.